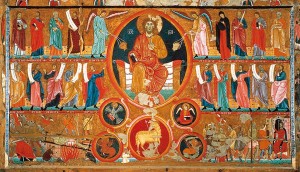 The Dossale, of great value, now preserved in the National Gallery, shows a property amenities include can extend horizontally according to a usual pattern in the Umbrian and Tuscan area. The style and the features are similar to the artistic culture of Spoleto. The frontal of Janus, with its bright color contrasts with the elegant linearity of elongated figures and draw the lines of the contours and the minute highlights that define anatomy and drapery, is the work of a first-rate artist, heir to the great tradition of previous century, much of the mosaic cycles of Sicily, the tradition dell’aulica “Greek” expressed in Grottaferrata, as in the experience of Rome, Tivoli, and Anagni. perhaps expert in miniature, also harks back to the Umbrian territory that offered to its direct experience several examples.

The frontal, designed to probably decorate the altar of the crypt of San Felice shows at the center a representation of the Last Judgement, the scenes instead of the martyrdom are found in the lower register. At the center, within an almond, it is depicted Christ enthroned; the sides, Michael and Gabriel as angels and two rows of Apostles led by the Virgin and St. John, in the middle register two rows of Prophets, five on each side. Below, under the throne, it appears within a circle the Agnus Dei and the four living Apocalypse (Angel, Eagle, Taurus and Leo) emblems of the four Evangelists. A series of half-figures of angels, now partly lost, appears on the upper side of the frame, the six figures of saints, three on each side, laterally adorn the same frame, that the lower side has completely lost the decoration. In the lower register are represented four scenes of the martyrdom of San Felice San Felice is interrogated and made whip, then dipped into a boiling cauldron, exposed to fire on a grate and finally beheaded by the executioner Sevibo. The legend is known in four editorial offices, of which the oldest (ninth century) belongs to a code of Farfa Abbey confirming the link between Benedictine monasticism and worship of this Bishop Martyr, on the place of whose burial, near Giano , had to take place already the fifth and sixth century monastic settlement first, and later, in the early thirteenth century, the building of the abbey church for which he was commissioned the altarpiece.