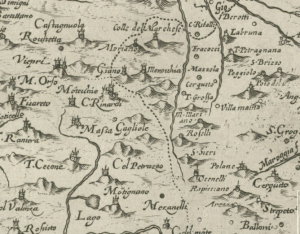 Normandy is the name given to a part of Giano territory , which included Macciano , The Castles of Clarignano, Colle del Marchese, Morcicchia, Moriano, Castagnola, Montecchio and Giano ell’Umbria. The etymology of dubious interpretation, came from the settlement of the eleventh century that Normans had founded in these lands. Another hypothesis instead derives its name from the fact that the inhabitants, under the direct administration of the Pope, were called manuals from clergy of Rome and the name “Normandy” is due to ” Norman ” that is equivalent to ” manual ” .