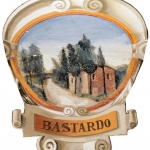 Bastardo was in Roman age a place of passage and crossroads of two important roads: the ancient Via Flaminia and the Via Tuderte . Along this way ” Osteria del Bastardo ” could refer to the origins of one of the first owner.

The Devil’s Bridge (Ponte del Diavolo) is an evidence of the ancient Flaminia Vetus almost entirely hidden by vegetation. The bridge was dated between the second century B.C. and the Augustan age, built to cross a ditch. The bridge is located near Bastardo, in the village of Cavallara and there are many popular beliefs related to his name

Linked to the history of the aforementioned Morcicchia, the Moriano castle takes its name probably from Morice name or Meurice, that “rock”, a castle built on a rock. Mentioned in the documents as Muricis castrum, it belonged to the fief of Arcuri lords and was among the first castles that they submitted at the Spoleto domain; It was the same Frederick II to confirm the Spoleto jurisdiction over the castle in 1241. Prior to joining Morcicchia and have its own municipal statute also entered the orbit of Normandy. Very little is left of the ancient castle, they were reworked and integrated both the walls both inside the buildings; only survivor is the St. Martin church, just outside the walls, built of local stone, with a small bell tower. 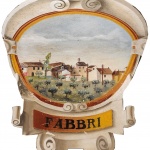 Down the valley, from the village of Janus, we meet the village of Fabbri; in this place was probably built the church called St. Mary of Lucciano, the church remains only a pile of rubble in an area called the Gregorian land registry: “Pia Fondacci”. In the area have emerged during excavations agricultural, human remains, testimony of numerous burials related to the sacred building. Along the main road overlooking the San Filippo Neri church, built in the seventeenth century. 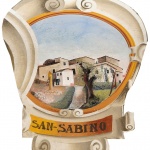 The small town, once called San Savino, it is noteworthy for the parish church today dedicated to San Lorenzo. The name was probably changed in reference to the nearby church of San Lorenzo of Macciano, whose remains are visible just outside the town, incorporated in private buildings. Built of local limestone, at the end of the twelfth century. Retains the original building a pretty semi-circular apse and a Roman memorial stone probably used as an altar base. The interior, remodeled in the eighteenth century. still it has fragments of frescoes. 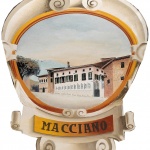 It, was formerly called Mazzocco, as we refer some documents. Then he took the name of Mazzano and with this title we find it among the villages that were part of Normandy. The events of Macciano then were linked to the history of Janus and then to that of Spoleto. We know from sources that there was a church dedicated to San Clemente, subject to plebanate the most important Santa Maria di Lucciano and then the Chapter of Spoleto; Today nothing remains of the ancient building and in its place stands the modern church, dating back to 1947. 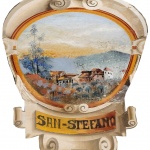 Santo Stefano was built next to the Chiesa della Visitazione, now isolated from the agglomeration of houses and flanked by an old oak tree. Built in the seventeenth century. at the behest of Carlo Marcucci di Giano  it has a sloping façade there is engraved the date of construction, 1612 and the initials of the buyer. The building, which unfortunately was abandoned and used as a warehouse and is now unusable.

The center has origins, probably Roman: it was a predio, ie a campaign fund of the Roman family Secia, documented between the I and II century. d.C in areas of Montefalco and Bevagna. In the Middle Ages it is documented as a small center with the presence of the church of S. Martino, the fourteenth century. completely destroyed today. 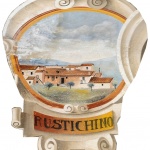 The settlement grew around the church of San Michele Arcangelo, which no longer exists in its place was built, in the second half of the thirteenth century. the Church of Carmine, with a simple gabled structure; It was rebuilt in 1680, as evidenced by the date engraved on the entrance door and the baroque decorations inside. 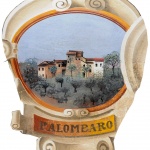 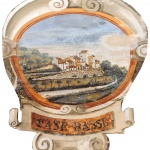