The vegetation of the Monti Martani is not homogeneous, but varies depending on the substrate, exposure and altitude. From the slopes of up to 550-600 m lies a cultivated end: with olive trees, arable crops between Giano dell’Umbria and Morcicchia (cereals, sunflowers, vegetables) or pasture and meadow polifitici, in the opposite side. In addition, the oil limit covers a discontinuous forest belt. The western and southern slopes, the warmest and sunniest, are dominated by thermophilic forests of oak (Quercus pubescens) and oak (Quercus cerris), while the north-eastern, more shady, from mesophilic forests of oak and hornbeam (Ostrya carpinifolia) . We can also find maple, flowering ash, laburnum, hawthorns, dogwoods, junipers, oaks and dogwoods. In the San Felice area, there is the holm oak (Quercus ilex), flanked by species typical of the Mediterranean climate such as viburnum, buckthorn, strawberry tree, the stracciabraghe, asparagus and pungitopoi. The woods are interspersed with conifers (pines, firs and cedars) used in various reforestation. Along water courses also grow riparian forests consist of willows, poplars, elms, elders and locust trees. In the summit area extending secondary grasslands, often used as pasture, mainly consisting of bromine, star purpurea, rattles, Covetta meadows and brome. Here you can meet secular individuals hawthorn, flanked by juniper trees and wild roses. In northern and eastern slopes, above 1000 m, there is the beech (Fagus sylvatica) in small formations known as La Ghiaccia and San Pietro in Monte. In spring and summer you can see the summit of beautiful daffodils blooms, orchids, lilies, buttercups, crocuses and violets.

The territory since ancient times, has been the subject of a strong human pressure. Until the Middle Ages, the relief it appeared entirely covered by forests of oak and beech trees, except for the grassy summit. Since 1200 began the first substantial deforestation, to allow grazing of sheep and cattle. These progressed insistently until the First World War, after which they were carried out the initial afforestation. For this purpose were included mainly conifers, not always native, able to re-colonize the significantly degraded limestone soil. The species most used were the black pine (Pinus nigra) and the Aleppo pine (Pinus halepensis), associated with pines, cypresses and cedars. In some locations also it has been employed indigenous hardwood (oak, hornbeam, flowering ash, oak, alder). After the War, the work was continued before Corpo Forestale dello Stato and from 1928 by the Milizia Nazionale Forestale. After WWII Comunità Montana have further enhanced the vegetation by planting seedlings of oak, oak and hornbeam with black truffle hyphae. 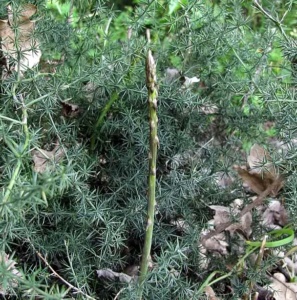 Asparagus acutifolius L. Asparagus With the name refers to the entire plant or just edible bud. It is a species typical of the Mediterranean area shrub with woody stems, thin and lithe. Asparagaceae belonging to the family is a dioecious species, or with male and female flowers on different plants. The shoot is harvested and used in various dishes, such as omelets and pasta dishes, or eaten boiled and seasoned with oil and salt.

Calendula arvensis (Vaill.) L. Calendula is a common herb in the countries bordering the Mediterranean Sea, where it is found in uncultivated meadows, along roadsides and in the olive groves up to 600 meters of altitude. It is an ‘annual species with erect posture and trunk that reaches a height of 20-50 cm, very branched and with taproot. The leaves of light green color and without stem are lanceolate-spatulate, thick and covered with a thick sticky hair, with slightly wavy margins and slightly sharp peak.

Cichorium intybus L. Chicory is a plant, biannual or perennial cosmopolitan, or that is found on all continents. The color blue-lilac inflorescences have the particularity to be open at dawn and close again at sunset. Chicory using the roots, leaves and flowers. 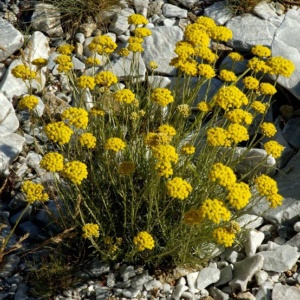 Helichrysum italicum (Roth) The helichrysum is an aromatic plant of Mediterranean origin belonging to the Asteraceae family that grows in arid environments such as rocky cliffs and escarpments. It is a small shrub with upright arching suffruticoso behind drums. The leaves are linear gray-whitish color due to the presence of a dense fine white pubescence.o.

Malva sylvestris L. –  Mallow is a herbaceous plant belonging to the family Malvaceae. It has woody stems at the base, striated and bristly. The leaves with long petioles have rounded shape with five lobes in the margin notched. The flowers localized axils of leaves are purple-streaked pink.

Urtica dioica L. Nettle is a sub-cosmopolitan species, which is present in almost all parts of the world. Plant that can reach even exceed one meter in height. The two by two opposite ovate leaves are lance-shaped and serrated on the margin, dark green and wrinkled appearance. The whole plant is covered with numerous hairs that the microscope to reveal a structure ampoule containing the liquid stinging.

Poterium sanguisorba L. = syn. Sanguinosorba minor Scop. The burnet is a herbaceous plant belonging to the family Rosaceae, we recognize very easily thanks to its imparipinnate leaves composed of many leaflets elliptical (odd number) serrated, attached to a long stem that varies in color from green to red-purple . Between the late spring and early summer they develop thin stems that carry the typical red inflorescences of globular shape. This plant grows wild throughout Italy and much of Europe and Asia.

Rosa canina L. Very common in hedgerows along roadsides, on the edge of forests and uncultivated. The imparipinnate leaves consist of ovate-lanceolate and serrated segments. Details are its flowers are characterized by 5-lobed petals light pink color. The wild rose blooms from April to June. 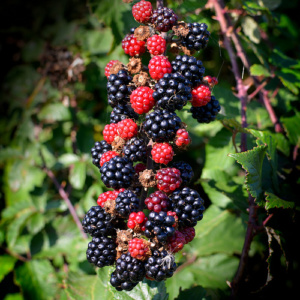 ROVO BE MORE COMMON OR ROVO

Rubus ulmifolius Schott.  Perennial shrub belonging to the family Rosaceae, semisempreverde, native to Europe south central. Usually it consists of a main root plate, from which depart numerous lateral stems. The flowers have five petals pink ovals. The seeds are enclosed in fleshy casings forming false fruits that are called “sorosi” or blackberries.

Sambucus nigra L. The common elderberry is a plant belonging to the family Adoxaceae. It is a deciduous woody shrub. It is a widespread species in Italy especially in ruderal areas, along the roads, the fields, at the edge of the woods and along water courses. The elder can reach a height of 8 m. The young branches are green with longitudinal lenticels. The flowers are white milky small size and umbrella-collected in inflorescence.

Satureja montana L. Small suffruticoso shrub belonging to the family Lamiaceae, native to the mountainous regions of southern Europe. Presents stems erect or ascending, branched, up to 50 cm high. Linear-lanceolate leaves are dark green and very aromatic. In Italy it is present, spontaneous from north to south excluding islands.

Taraxacum officinale Weber (aggr.) Spontaneous herb belonging to the family Asteraceae, also known locally as “Pisciacane”, wetter, or dog tooth head under the name Taraxacum officinale. Collecting many species and subspecies that are found throughout the northern hemisphere, all morphologically similar to each other whose identification is also sometimes be complicated for expert botanists. These species can be found from sea level up to about 2000 m s.l.m.

Thymus serpyllum L. (aggr.) It  is a perennial plant belonging to the Lamiaceae family. Under the name Thymus serpyllum includes numerous species morphologically similar and difficult assignment. Characteristic are the woody stems at the base, creeping and often rooting at the nodes with flowering quotes erected.

Clematis vitalba L. The clematis is a shrubby plant of the Ranunculaceae in euro-Caucasian distribution. The name literally means white clematis vine. In Italy it is present on all the territory up to about 1300 m in fallow, deciduous forests, temperate spots and shows a lianoso behavior.