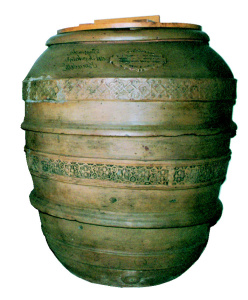 From the twelfth century in Umbria, as in the rest of Italy, it was mostly the monastic orders to give new impetus and new life to the cultivation of olive trees and olive oil production, the use and consumption had been poor for all the early Middle Ages because of the numerous destruction suffered from the countryside, which had led to a consequent impoverishment of olive groves.

Olive oil returned after the Roman period, to be a valuable product from countless functions; thanks to it the lights were lit on the sacred altars and never failed in the most important religious rituals, as confirmation and extreme unction.

Unlike the ancient Roman cuisine, which had been a key element, the oil was not among the leading food gastronomy of the Middle Ages, since far more expensive than other fat certainly less healthy but cheap such as lard and lard; the oil useful in many circumstances, it imposed a use rather thrifty. The monks also used as a medicine because of its miraculous soothing, decongestant, moisturizing and nourishing. It seems that it was used to treat the headache and scabies, annoying contagious disease of the skin at the time very frequent, but also to counteract alopecia and dandruff. Among the many natural remedies, the oil was used together with wine as a medicine, called Balsam of Samaritan, was used for burns and to soothe the pain of ulcers; but they were known since ancient times for their healthful effects: soothing the wounds the oil prevented them from drying out, and its action was added that a little wine bactericidal.

The Benedictine monks of San Felice was no less so; faithful to their rule “ora et labora”, they transplanted, to resume the cultivation of the land after a period of abandonment type of olive, called Cultivar San Felice, who has suffered taken root and spread in a few areas and producing excellent quality of olives. Augustinians then continued the agricultural vocation of the old owners; inside the abbey in fact there was a real animal traction mill which remained in use for many centuries.

The local cultivar San Felice contributes today to characterize the Dop Umbria, sub-zone “Colli Martani”, along with the Moraiolo (which is the most common variety in the hills of the region) and other cultivars such as Leccino, Frantoio, Rajo and Vocio. The combination of different varieties and microclimate particularly favorable environment guarantee the organoleptic quality and uniqueness of the oil Giano dell’ Umbria, exported, as early as the eighteenth century, in Tuscany, Emilia – Romagna and Marche.

The olive, earlier than in the past, is mostly done by hand picking, while working in the six are still active mills using modern extraction technologies, usually in a continuous cycle, to ensure continued high quality standards.