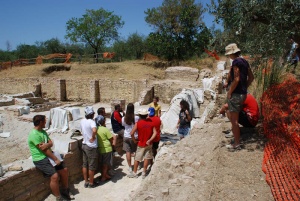 The work has identified 18 relevant environments to a roof of a large villa rustica who knows the moment of maximum splendor in the early imperial age, even if the system goes back to the late Republican period. The latest figures seem to confirm a continuity of use until the fourth century d.C ..

Two of the rooms surrounding the peristyle (Room D) it was possible to identify the function: these thermal environments in which they were found tubules for the hot air passage and a mosaic portion of black and white tiles of fine workmanship yet in place.

The compartment A, identified as caldarium, namely a heated room where did the hot water bath; It was heated by circulating hot air in the floor and walls intercapedeini (suspensurae).

During the excavations in 2004 inside the compartment A was found a fragment of mosaic made of black and white tiles in geometric patterns of great refinement.

The compartment B, identified as tepidarium, passageway from the cold bath warm bath, returned a still preserving the white plaster wall.

The environment that links these with compartment D (compartment C) returned part of a water-pipe made of cylindrical tubules terracotta. Moreover, almost all the rooms are traversed by a complex system of channels for drainage of water that all flow within a large cloaca, which flows under the peristyle (compartment D).

During the excavation of 2003 compartment D emerged from several portions of brick columns covered with white stucco with moldings, architectural slabs and numerous ceramic fragments of great refinement.

The walls are all made with great skill, in local pink limestone. One of these walls presents monumental dimensions; It is given that this is a long structure at present about 24 meters, but still proceed for a length not conceivable, and that will keep for about 3,50 / 4,00 meters elevation; If only one country villa in Umbria.