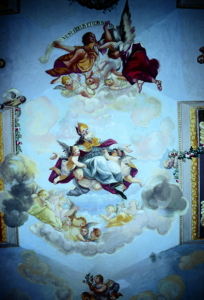 San Felice, the saint of Giano dell’ Umbria and Massa Martana, was bishop between the late third and early fourth century of Vicus ad Martis (Massa Martana). the hagiography was complicated who was th bishop of the oldest Massa Martana, Giano, Spello and  the place and date of his death was doubtful. Different versions are also related to his martyrdom occurred at the hands of the prefect Tarquinio presumably between 304 and 306 A.D. It is said that for int

The legend says that the saint was subjected to a terrible torture: he was immersed in a pot with boiling pitch, was put on hot coals as San Lorenzo, he was eventually beheaded. Several also said they were the extraordinary events that raged at the time of his death: the sudden clouding of the sky with thunder and lightning, an earthquake and the appearance of angels. After his death, to give proper burial to Felice, the Christians of the Vicus ad Martis took away the body and built in secret, in a 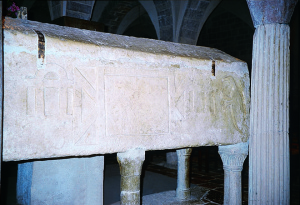 sacred grove of oaks where the saint retired to pray, a chapel was built to contain the sarcophagus. On the grave of Felice, in the tenth century, the Romanesque church was built of local stone, to accommodate the pilgrims who came to pray to the Holy. According to a legend the oxen that pulled the chariot carrying the body of the martyr from the Vicus ad Martis to the territory of Giano, arrived on a small hill knelt to show the place where the church was to be built. According to another version, the oxen would rather restive,
dropping the sarcophagus of the saint in the place where now stands the church. Object of great devotion, the body of Felice was stored in a local travertine sarcophagus rests on four pillars, decorated on one side with elements difficult to interpret; his tomb was known to have healing powers: people suffering from pain in the bones, and the children who had problems in the limbs and eyes were indeed miraculously cured in contact with the tomb. The sick, as they tell the images inside de cloisters of the Abbey, had to go crawl under the sarcophagus of San Felice, touching it with the body, to get out of so many ills cured. The inhabitants of Giano, were in the habit of honoring San Felice also during the procession of the Madonna del Fosco … passed behind the coffin as a mark of homage and then continued to the Sanctuary.

The feast of St. Felix, the patron saint of both Massa Martana, both of Giano dell’ Umbria, is celebrated on October 30.