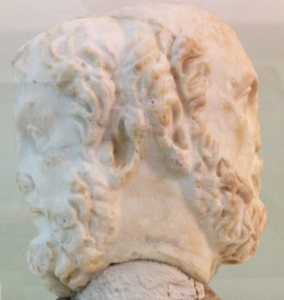 Giano (Janus): The God of beginnings

Janus is one of the oldest Roman gods;  according to legend it is the sovereign of golden age, bearer of civilization and laws among first population of Lazio. As the name reveals, it is patron of beginnings and passages, in human and natural in those activities. In the prayers Janus is called in the first place, and the first month of the year is dedicated to him. The doors of Janus temple in the Roman Forum, were closed in periods of peace.

The Romans took over almost all their gods from Greek tradition altering figures already familiar to them or introducing new ones.

Janus home was the Janiculum hill, which in Latin means “place inhabited by Janus”.

Janus was an ancient ruler deified after death, rule on the primitive inhabitants of Latium teaching them the arts of navigation and agriculture, as well as the customs of decency and respect for the law.

In 27 BC Emperor Octavian Augustus, defeated all  enemies of Roman Empire, finally celebrate the return of peace in Rome. After almost a century of uninterrupted wars, the doors of temple dedicated to Janus located in the Roman Forum, are closed. It was an extraordinary event that previously occurred only in very rare occasions. Why? As its Latin name, Janus (Ianus) was the god of the passage (originally through a door, in Latin ianua); in particular, it is the god of the beginnings of human or natural activity. Infact it was represented as a bust with two faces (two-faced herm) looking in opposite directions: the beginning and the end, the indoor and outdoor, the interior and the exterior.

Closing the doors of the Temple of Janus had a symbolic value for Romans: the beginning of a new age of peace. On many other occasions Janus, as the god of the transition and beginnins, was invoked and celebrated, especially from the lower society: for agricultural activities, for public and private businesses.

At Janus was dedicated not only the first day of each month, but even the first month of the year: March (Ianuarius). Its festival was celebrated in mid-August, with Portunus, the patron deity of the ports.

The cult – All crossings of roads were sacred to Janus, and here were offered sacrifices to the god and votive tablets. The most important temple was in the Roman Forum, which was dated to the second legendary king of Rome, Numa Pompilius. A particularly significant ritual in Janus honor was the following: the young Romans as a sign of purification and transition to maturity, had to pass under a low beam fixed between two small temples, sacred one to Janus and the other to Juno .

Perhaps because Janus was the protector of the beginning of each activity, and also of merchant, traditionally criticized by the ancient moral, and even illicit, the symbolic image of the face-faced, originally own to Janus, and the concept of two-faced passed indicating an ambiguous or opportunistic attitude, a person ready to change opinion depending on your convenience.

A way of bandits … 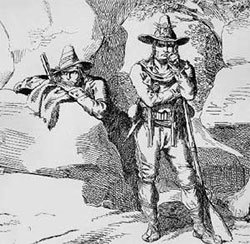 The territory of Giano dell’Umbria, above the valley of the river Puglia, partly crossed by the Via Flaminia, was the transit area of rich merchants. For this reason, many robbers lurked along the way to rob the carts and carriages carrying a rich cargo with them.

According to a legend, near the Osteria Vecchia of Montecchio happened that a noble woman who had with him a chest full of gold and diamonds was travelling in a carriage. Seeing the bandits come, the soldiers escorting the woman hid the precious treasure chest to hide it from the criminals. There was a fight between the robbers and the soldiers, who were defeated. Such incidents were frequent, especially during the papal rule.

In 1800 there were many robbers who with their adventures marked the imagination of the inhabitants of our land. One of the most famous was Nazareno Guglielmi called “Cinicchia”, whose fame was so widespread that even fù dedicated a ballad, but it also reminds Giuseppe Sabbati, called  the “witch”. 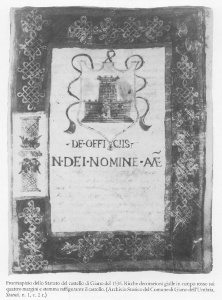 In different time almost all the castles of Giano dell’ Umbria are equipped with a City Charter: significant testimony of autonomy of social life and a desire to regulate the communities.

The statutes, now kept at the State Archives of Spoleto, written in Latin contained rules, regulations, prohibitions, penalties aimed at ensuring the  quality of life of these small communities.

These texts are  fundamental documents to learn about the society of the time. From Statutes emerging  an economy devote prevalencely to agricultural and pastoral, therefore it justifies the attention in the statutes for the resources that came from the earth and the policy of protection of land.

For a long time, in fact, the daily lives of these castles was influenced by the seasonality of crops and an ancestral relationship with the earth, made of rules and rituals.

The statutes  are important tools from pedagogical point of view because they show the attention and protection to those who were the commons: public sources, the woods, the buildings. In Statues there was also a social sensitivity, which aimed at protecting the most vulnerable people. We can find the strong condemnation of usury, for blasphemy, for insults and for non-compliance of the festivities. The Statute of Giano, Castagnola, Montecchio and Morcicchia- Moriano have been refound and studied.  The latter, for example, drawn on parchment in Latin to the Pope Leone X, in the sixteenth century is also avaiable the vernacular text drawn up in the seventeenth century : it is a rural nature status and is divided as follows: the tablets, the Book of the Civil, the books of Malefitti, of Straordinari and Dannidati. The City was administered by a mayor that lasted six months in office, and that he could not be absent more than three months from the castle. At the end of his term he was controlled by a scindico, and in case of fraud had to pay 100 Soldi (money of XVII sec).

With the Massari, one for Morcicchia and the other for Moriano, the mayor was in charge of economic management and the protection of all assets. He also had to act as a notary mansion and chancellor. Then there were the farmers who could made the arenga, it was made up of “a man will for fire” and met by convening enunciated by balio, in the Palace of the community. All’arenga could not participate in the under-16s, or strangers. Reporting to the mayor and the Massari were: the chamberlain, responsible for the custody of pawns and money, the Balio, which was read out loud the calls, and perform foreclosures; Ambassador and estimators to assess the amount of movable and immovable property. 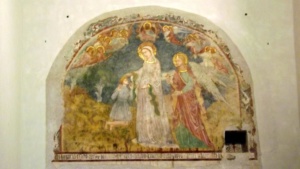 Sanctuary of the Madonna del Fosco

The Sanctuary of the Madonna del Fosco, situated between Castagnola and the Abbey of San Felice, set in a place “Fosco”, as dark as reminds the name, and is

testimony to the strong popular devotion of the past. Its construction is linked to the miracle at the XV century: the last Sunday of June 1412, Our Lady appeared to a young shepherd, during a terrible plague that had hit the castle of Castagnola asking him to build a chapel in that place to stop the plague. Where he stood the little chapel was later built the Sanctuary, which shows today a result of nineteenth-century structure several reconstructions . But inside you can admire above the altar ‘s fifteenth-century fresco depicting the story of the apparition.

THE LEGEND OF “CERQUA DURMJOSA”

The legend tells of an ancient oak tree in which the women of the area who wanted to have children had to travel to pick up their children. Interesting is the reference to the oak tree-cults and rites of fertility associated with it, widespread in pre-Roman and Roman times.

THE LEGEND OF “LAGO MORTO”

According to legend, in remote antiquity, the mountains, there lived a people devoted to the sheep, whose prince would be drowned in a lake near the present place Monte Martano. To retrieve the body of his son, the Queen would have ordered pastors to shear all the sheep, the wool drying up the lake. The name “Lago Morto”, attested in several ancient documents, is still in use with reference to a karst sinkhole and the legend associated with it leads to the discovery of the Martani Mountains of votive sites dating back to the Bronze Age. Monti Martani were in fact part of an old path of transhumance, as attested by many archaeological findings.

One of the most widespread popular belief in the territory of Janus is related to the hidden treasures of which the most famous is certainly that of Tower or Tower of Morcicchia: Clarignano. In such an area rich in history there were many places where it was believed to be hidden precious remains of an ancient past. The stories passed down the adventures of treasure hunters and refer to curses, to unexplained atmospheric phenomena and the discovery of secret underground chambers.

THE CAVE OF THE WITCHES

The Cave of the Witches is located near the village of Morcicchia, in a place inaccessible and its wild beauty, overlooking a cliff. The name of this place is linked to the legendary figure of the bandit Giuseppe Sabbati nicknamed “the witch”, who lived in 1800, who chose him as a hideout for the spoils of his robberies. Brigandage was in fact widespread in the area since ancient times as the territory , especially in the Puglia river valley, crossed in part by the Via Flaminia was a transit area of rich merchants.

Giano dell’ Umbria in the ‘700 was famous for its healing waters, a fact some documents. On the advice of renowned doctors, many foreigners came there for the curative waters of a Water source named Santa. The source, of which few traces remain was at Sant’Andrea. With the advent of Christianity the ancient places of worship of water were often renamed with the name of this holy and can not be excluded that the Holy Water was a sacred spring already in very remote antiquity. Another source of which remains an interesting name is that ACQUA TRAVAGLIA, whose waters would rather negative power.

The INN OF BASTARD

The village of Bastardo was in Roman times a place of passage and crossroads of two major roads: the ancient Via Flaminia and the Via Tuderte. Along this track, “Osteria del Bastardo”, whose name could refer to the illegal origins of one of the first managers, was a stopping place that allowed the travelers to rest, refresh themselves and cater to horses.