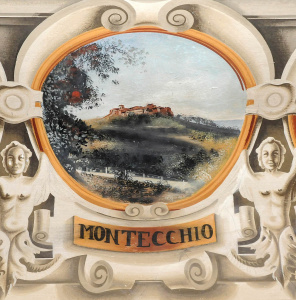 In a dominant position on the Via Flaminia Vetus became an important castrum, incorporated in the so-called “Normandia”. It was fortified in the tenth century and in the twelfth century it was subjected to the lords of Janus, later became common with the other two rural settlements of Castagnola and Morcicchia. It underwent several dominations, because of its strategic location: the city of Spoleto, the Lordship of Todi and the Acts of the Trinci of Foligno; in 1479 he came under the jurisdiction of Bartolomeo della Rovere who had received it from his uncle, the famous Pope Sisto IV. Being one of the centers along the Via Flaminia, in 1530 hosted its walls for a few days Pope Clemente VII, to Rome, and in 1553 was unfortunately attacked by direct French troops in Naples, and the inhabitants were forced to take refuge in the surrounding mountains.

The castle still preserves, almost unchanged, part of the walls, which have been raised/built in the twelfth century and rebuilt in the fourteenth; the gateway that still use, is equipped with coats of arms, among them stands out the coat of arms of Spoleto. Entering the castle, the pretty little square where we overlook the Town Hall, the sixteenth century, with the coat of arms of the castle, depicting three mounds, and St. Bartolomeo church that still keeps the medieval structure, with stone quoins white and pink. The interior, a single nave and the roof trusses, shows numerous fragments of various period frescoes that testify to the importance that the church had to maintain over the centuries; particularly valuable the stone altarpiece of 1430, placed in the main altar; is the Archangel Gabriel killing the dragon, St. Peter and St. Paul, and comes from a church dedicated to the Virgin, once located along the Via Flaminia. Also along the consular road, it stood another religious building: the church of San Rocco, with attached hospital to receive pilgrims and the sick; the structure is still visible on the plain from the main road. The castle, once divided in 4 districts: San Bartolomeo, Flaminia, Arch, Tuderte, still shows, around the square, the center of religious and social life, a network of narrow streets and medieval buildings, the characteristic stone structure. Testimony of their autonomy, in 1500 Montecchio was endowed with its own laws; an important document, written in medieval Latin, which includes the organizational and institutional principles that governed life in the castle. Transcribed in 1838 is preserved in the Archives of Spoleto State.