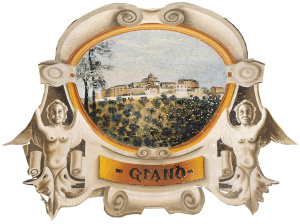 Giano dell’ Umbria is a small medieval village located in a panoramic position overlooking the Umbrian Valley, in the extraordinary setting of Monti Martani.

The castle probably derives its name after the heathenish god Janus (italian name GIANO). Ancient settlement of rural type, built in Roman times near the “Via Flaminia Vetus”, a roman path that connected Rome with the Adriatic Sea, has more ancient origins dating back to the Umbrians; as evidenced by the ancient “Castellieri” (fortified settlements of prehistoric origin, characterized by a moat and an embankment, with one or more walls of limestone), found on the tops of the Martani Mountains and the many Umbrian period objects discovered in the area.

The first document that testifies the existence of the place dates back to the time of Desiderius, king of the Lombards: it is a “Placito” (760 d.C.) concerning the definition of the boundaries between Spoleto and Todi which reads on the spot here nominatur Jane; the Passio of S. Felice, patron saint of Giano dell’Umbria, however, is appointed Castricianum, (Castrum Iani). The cult of Janus, seems to remain even in the name of the ancient parish church of Janus, called Santa Maria di Lucciano, of which there is a clear derivation from the Latin “Lucus Iani”, ie forest of Janus, confirming the sanctity of the place.

In the Middle Ages, thanks to its strategic position becomes a fortified castrum, often discussed by most neighboring towns strong Spoleto, Foligno and Todi but also by the Papal States. Certainly not spared by the invasions of the Goths, Byzantines and Lombards, the fief of Janus was part of the small province in medieval times was called Normannia and included a vast territory. Granted in 1247 by Cardinal Raniero Capocci Tied to the City of Spoleto castle, around the year 1250, it became a rural community; between the various contentions it included those with the City of Spoleto; in 1532, rebelled, again, against the domination of Spoleto, but this time the supporters of the uprising, moved to the city, were hung on the windows of the palace of the people. It was a hard lesson for the inhabitants of the castle remained under the jurisdiction of Spoleto until the nineteenth century., Except for the Napoleonic period, when in fact the Republic (1798) and French Empire (1810-14), the castle was erected in common with free jurisdiction of Montecchio, Castagnola, Morcicchia, Moriano and Colle del Marchese; that grade, to the exclusion of Colle del Marchese, he was recognized with the administrative reform of the Papal States (Motu Proprio di Pio VII of 6 July 1816) and in 1860 with the advent of the unification of Italy.

Important municipal autonomy testimony is the preparation in Latin, in 1536-37, a City Charter, kept at the municipal archive: it shows, even today, the frontispiece with the coat of arms of the castle; is stored along with key documents to reconstruct the history and daily life of the village: the acts of the mayor, the parish registers of the population, the administrative acts of the Municipality, the Congregation of Charity and Hospital.

The small town still maintains intact its medieval appearance, formed by the cohesion of two circular walls with gates, towers and posterns showing the typical urban structure spiral. The walls date back to the XII-XIII sec., In blocks of local limestone, were restored on the orders of Cardinal Albornoz in the fourteenth century., Commissioned by the Pope to the political reorganization of the territories particularly restive central Italy.

Passing through the narrow medieval streets of the center, you can find yourself in front of two buildings of historical-artistic interest, the Chiesa della Madonna delle Grazie, which overlooks the main square of the village, on the highest point of Janus, and not far the the oldest church of S.  Michele Arcangelo. The church dedicated to the “Vergine Maria”, built in the fourteenth century, shows above the entrance gate the coat of arms: it was completely transformed in the Baroque era, with the change of direction of its central axis, and with the rich decoration in stucco and marble. It preserves some seventeenth century paintings by Antonio Cavalli and Andrea Polinori. The original fourteenth-century decoration remains only a “Madonna con bambino” of eighteenth century. A recent partial restoration made it possible to recover and to attribute to the very important sculptor Paolo da Gualdo Cattaneo the valuable stone corbels of the apse. The church of, the late thirteenth century, still intact instead shows the facade in white and pink stone l S. Michele Arcangelo bell tower. The interior, unfortunately very altered, retains few traces of fragmented apse frescoes of 1501 that are part of the Spoleto culture between the fifteenth and sixteenth centuries. There is also stored on the left wall of the nave, a fine wooden crucifix of the XVI century. Overlooking the square itself, the Municipal Palace, of medieval origin, rebuilt several times, shows neo-Gothic style, with Ghibelline battlements. To the left is walled, the emblem of the town, a tower dating back to the XIV – XV century. Of particular interest, in the council chamber, decorated top, with frescoes of 1934 made by local artist Ernesto Bannella, depicting all the castles of the Municipality of Giano. You can also see exposed various archaeological finds from the area, especially from the Roman Villa Toccioli.

Of particular interest, outside the walls, the church and the convent of San Francesco, built in the second half of the thirteenth at one of the gateways to the city center, has been damaged by the earthquake of 1997 and returned to citizens in 2009, after a long restoration. The complex can be considered among the first Franciscan buildings in Umbria, and is not to be excluded that the building had been wanted right from the saint. Two figures of eminent Franciscan, in fact, had local origins: Fra Giordano and Frate Bartolomeo: the first, perhaps in the order received by Francis himself, was a key figure in the apostolate in Germany, author of the Cronache, one of the most important sources the history of the Franciscan order. The second, scholar and great preacher was distinguished by an ‘important mission of evangelization in the East. The whole structure is documented, then, already in the thirteenth; the hermitage belonged to the “Custodia Vallis”, ie to the Custody of the Spoleto Valley, which was part of the Province of St. Francis or of ‘Umbria, one of the most important. In 1350 the convent was assigned to Fratello Gentile da Spoleto, and in 1373 the Paoluccio Trinci from Foligno, among the key characters Franciscan Observance.

The church was visited by many pilgrims who passed in these areas and who wanted to gain a plenary indulgence; In fact, since 1291 it was granted indulgences to those who had visited the convent. The exterior, in pink stone, with gabled roof, has an elevated than the original facade, an oculus buffered and a portal to rincasso. Sobriety is the dominant and confirms the typical architectural ideal of Franciscan churches. On the right you can see the former convent premises, including well-preserved is the dining hall, now used as a function room. The interior, with a nave, presents remakes six-eighteenth century; the rigor of the primitive Franciscan facility was altered, in fact, in the seventeenth century, when it intervened with the raising of the perimeter walls, a new roof, and was renewed l ‘furnishing of the church. The walls are decorated with six wooden altars of the eighteenth century, with seventeenth-century paintings, embellished with eighteenth-century frontals in scagliola, paintings with floral motifs. The altar serves as a wooden curtain and hides the original Gothic apse of the church decorated with frescoes of the fourteenth century probably spoletina school. But the most important paintings, rediscovered beneath the drab in the twentieth century, are located in the chapel of the Crucifix, on the left of the altar, with the cycle of frescoes telling the Passion of Christ and the Dormition of the Virgin, attributed to the painter Giovanni di Foligno Corraduccio (XIV century).

Between the first and second set of walls were located on Reclusorio Augustinian, the Hospital of pilgrims and the ruined Chiesa di San Biagio. Outside the defensive wall, however, are the churches of S. Biagio (1680), St. Francis (XIII sec.), With adjoining former convent of the Franciscans, and the desecrated Annunciation.