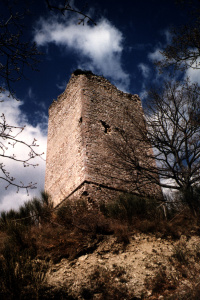 Clarignano tower dominate the surrounding hills and the Morcicchia castle, dating from the fifteenth century. It is the only evidence of the medioeval origin eponymous castle. The ancient center, takes its name, according to some by Clarignano Lords, the noble family that lived the castle in the XI, for others it was the same name as noble to take the name of the castle and grounds. Clarignano followed the events of the other fortified settlements in the area, was part of Normandy, was then subjected to the church and finally became part of the Duchy of Spoleto. Inside, it was also documented a church, dedicated to St. Bartholomew, of which unfortunately nothing remains. The bilge tower was commissioned by the City of Spoleto to the architect Francesco da Settignano; in the act of contract payments are reported, the materials used and the characteristics that must have the tower: an oven, a cistern, a fireplace, a staircase..ecc. we also know that much of it was reused castle material. The City of Spoleto appointment then for the Clarignano tower “a vicar who would provide the exercise of jurisdiction in that place and did, as usual, pay the collections and tolls from those who passed for that territory.” Clarignano fact he was in a strategic location along highly frequented roads and in fact was disputed by various centers of the area: Spoleto, Giano, Montefalco.

A curious legend: inside the tower was hidden a treasure, perhaps three golden pigs, a golden calf, or a golden hen with chicks. The place seemed enveloped by a gloomy atmosphere, it was believed that the treasures were cursed and that, to those who had unearthed them, something terrible would happen. Often treasure hunters were therefore forced to run away, frightened and empty-handed.